What Are Featured Snippets—and Why Do They Matter?

We’ve all come across Google’s featured snippets—that priceless real estate at the top of the SERPs that often answers the search query at hand in a paragraph, table, or list format. Featured snippets—or, as some SEOs refer to them, “position zero”—are obviously a big deal when it comes to SEO and winning organic traffic (they’re featured in nearly 13% of all search results and earn nearly 9% of clicks). But with voice search rapidly increasing, they’re even more critical in 2019.

In this blog, we’ll cover what featured snippets are, why marketers should care about position zero, and how you can start optimizing your content accordingly.

What Are Featured Snippets?

Featured snippets are expanded content and details that help users quickly get information about the keyword they searched. Featured snippets pull from a web page’s content, summarizing a quick answer for the user.

Now, featured snippets don’t just include everything that takes position zero, or, the space above the first search result. In fact, there is a variety of results Google serves users that appear first that are not featured snippets. These include:

Rich answers (not a featured snippet)

Shows answers to questions that Google considers part of the public domain. Because of this, Google does not feel the need to give credit to any website in particular. These answers do not link anywhere.

Knowledge graphs (not a featured snippet)

Often a group of sources that appear in images across the top of the page. Again, these results do not link anywhere, but instead take the user to a new search.

Rich snippets (not a featured snippet)

Featured snippets fall into a few main formats and types.

These are the kind of featured snippets you’re probably most familiar with, as they make up roughly 82% of all total snippets. They typically answer the search query in a few sentences and could include an image as well. 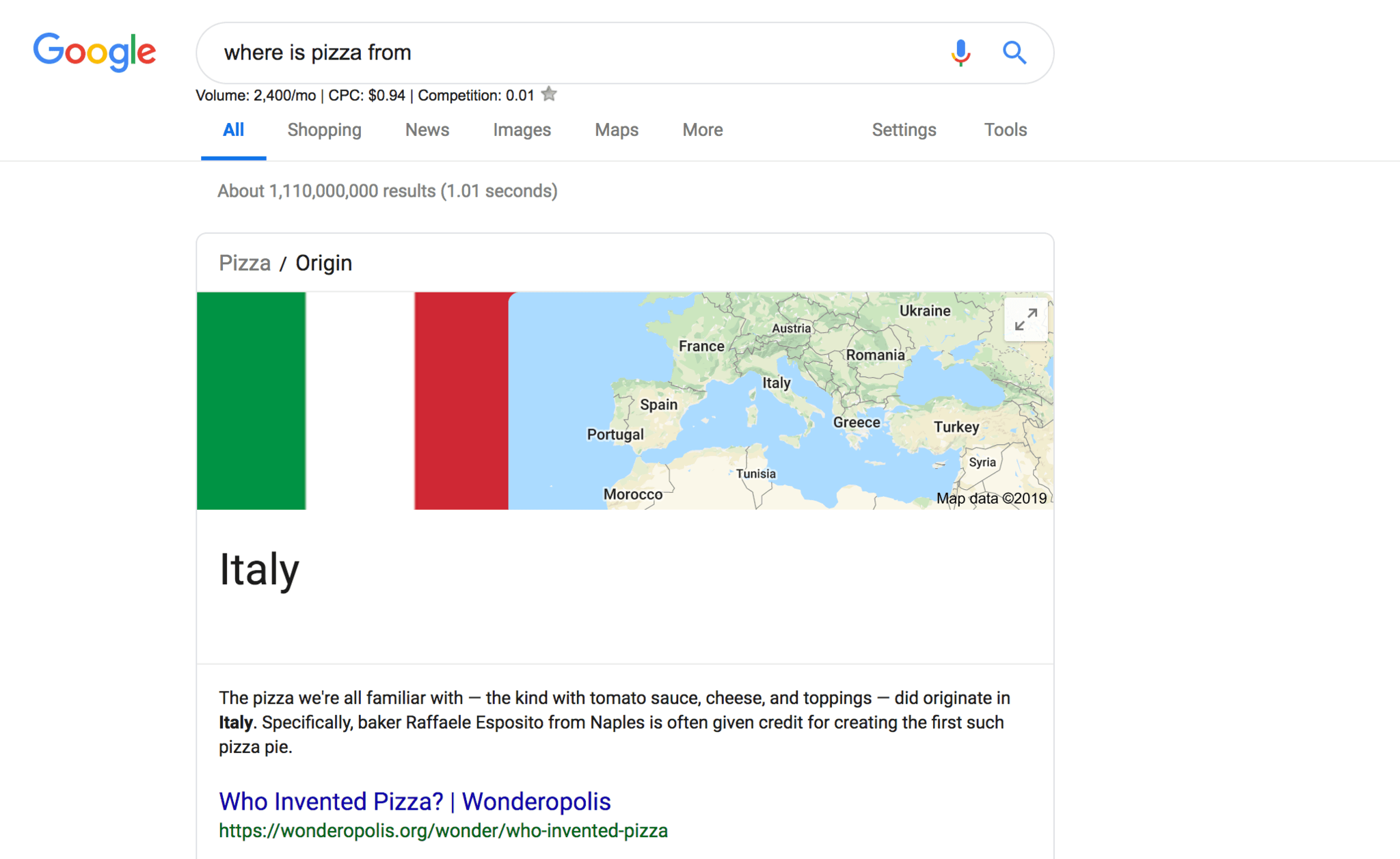 Instead of a paragraph of text, list featured snippets include text formatted in a number or bulleted format. This type of featured snippet accounts for about 11% of all snippets.

Information is showcased in a table format in this type of featured snippet. Note that not all tables appear the same way in a featured snippet as they do on the web page itself. Sometimes, Google actually takes bits and pieces from the content and creates its own table based on the exact search query and the intent of the search.

The final major type of snippet pulls video from YouTube based on the video’s description or its transcription. These types of snippets can be filled with a video, or can also showcase a paragraph alongside a video. 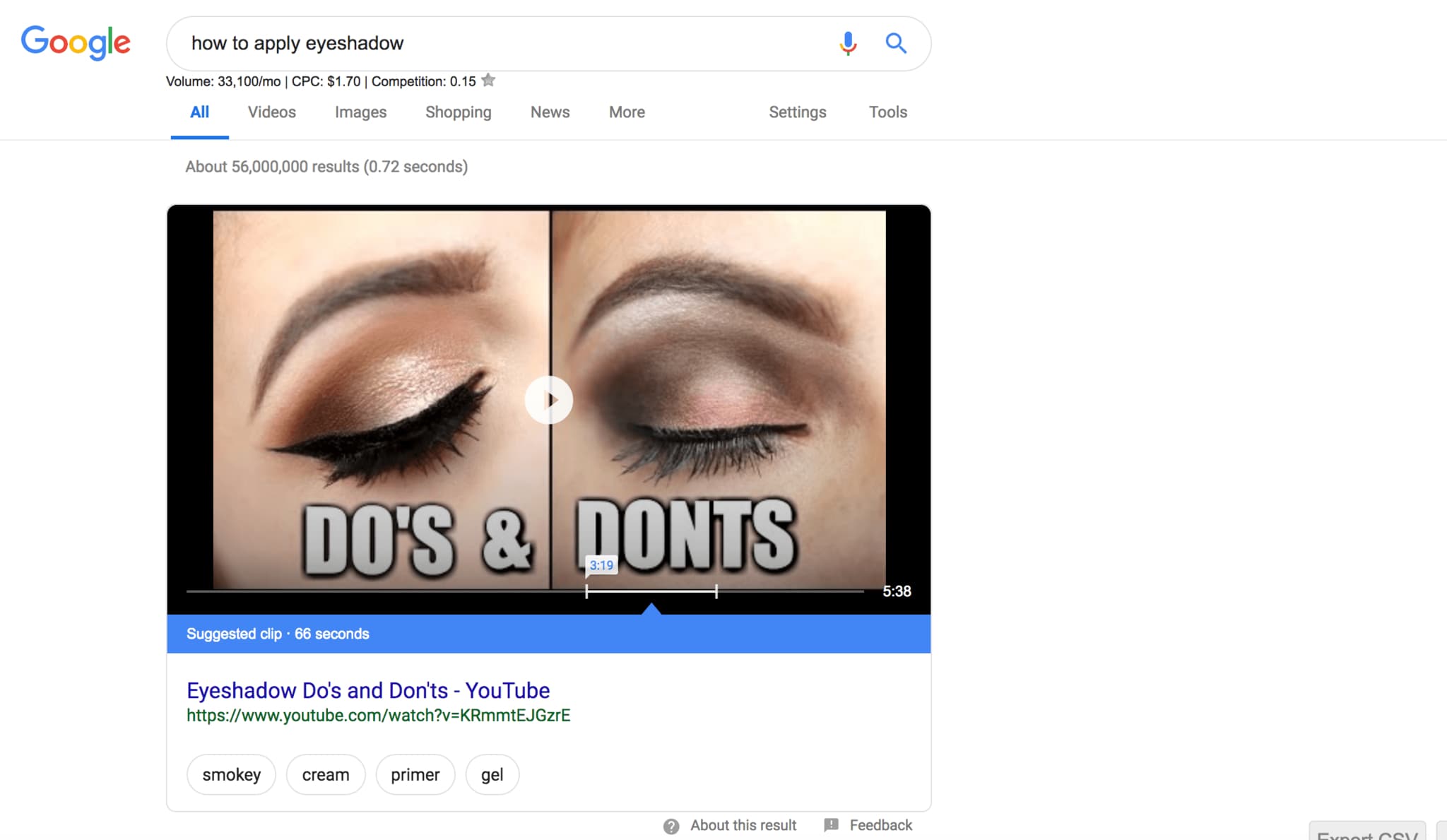 Why Do Featured Snippets Matter?

The obvious answer is that featured snippets give your site more visibility, credibility, and traffic. But another reason why featured snippets will continue to matter more to SEOs and businesses is the rise of voice search, which is estimated to be over 50% of all search traffic by 2020.

When someone asks their Amazon Alexa or Siri a question, voice assistants will answer with the snippet that appears in the search engine they use (Amazon uses Bing, for example). In the past, these voice assistants would give the user a choice between a few of the first page results. But as more and more search queries begin to show featured snippets, these assistants go straight to the snippet.

So we know that voice search is on the up and up, the number of featured snippets is also increasing, and that SERPs that feature a snippet result in roughly 18% less clicks for all other content showing on the first page. All of this means winning these snippet spots will almost certainly be a top initiative for SEOs in the coming years.

According to HubSpot, featured snippets are actually assessed based on a different algorithm than the traditional one we know and love from Google.

So we almost have to re-educate ourselves and truly understand the playing field. In this case, that translates to research, understanding what types of search queries result in which types of snippets, grasping how Google pulls snippet information, and creating quality content to make it all work.

As mentioned earlier, there are several types of featured snippets that each serve a purpose. For example:

Understanding each snippet type takes some research. Luckily, there are plenty of good resources and lots of research out there to help you on your way.

Long-tail keywords are your friend

We mentioned previously that voice search is on the rise and that voice assistants pull answers straight from featured snippets if they’re available. With marketers optimizing their content for voice search, this really just means SEOs will lean even more heavily into long-tail, conversational keywords—the types of keywords that generate featured snippets. It’s a win-win. And while I love using free SEO tools as much as the next person, paid platforms like SEMrush and Ahrefs have some pretty helpful snippet data for you to make more informed decisions.

If you don’t have access to these tools, you can also come up with questions related to your product or service and manually search them. From there, you can find featured snippets and Google’s related searches.

If you’re out of ideas from the get-go, talk to people in your organization that are closest to your customer. They’ll help you think through questions real people are asking, and what they need help with. And, finally, AnswerThePublic is a great tool to get keyword and content ideas.

Another important thing to note is that only YouTube videos ranking on page one in the SERPs actually get pulled into featured snippets. So create page-one level content first, and then optimize for snippets by including succinct text that answers the search query you’re going after.

Ensure your formatting is clean

Google relies on specific formatting to pull data into their featured snippets. That means it’s extremely important to format your content in a way that makes it super easy for Google to find and pull.

For example, if you’re optimizing content for a table featured snippet, you should include a <table> tag to tell Google that this is, indeed, a table. The same goes for unordered lists and number lists, leading the question as an <h2> followed immediately by your list.

For a ton more information on this, see HubSpot’s helpful research, which dives into tests they conducted and insights gleaned from the process.

Don’t Get Left Behind

Despite a few curveballs here and there (remember when Google upped its meta description length only to pull the plug a few months later? Mobilegeddon?), SEO has remained fairly stable over the last few years. But as voice search continues to rise alongside the number of featured snippets showing up for certain search queries, understanding how it all works and optimizing content should be on marketers’ minds going forward.

Don’t get left behind.

What Google Analytics 4 Means for Your Marketing

Content Strategy: Everything You Need to Know About Topic Modeling

The Secret Cost of a Bad Martech Purchase Decision