A lot of times when you see businesses write for public consumption, they just use bland business-speak, or a generic advertising tone. I’d love to give you some examples here, but to be honest, I legitimately can’t think of any. And that’s precisely the problem. These brands think they’re appealing to everyone by toeing the middle, but what they’re really doing is throwing away any chance they have to be memorable—and, probably, throwing away sales.

The obvious takeaway here is that you should not do that. Figure out who you are as a brand, and talk like that when you’re speaking to customers, prospects, and even your own employees. Easier said than done, right? Luckily there are a lot of brands doing good work right now, letting their unique personalities show through in their marketing.

Let’s take a look at some examples of brand voice, and see which businesses have developed the best brand voice. Brands tend to fall into categories no matter how unique they seem, so I’m going to show you a couple of examples for each larger category. Let’s get into it.

This seems obvious, but people like fun. So being The Fun Brand is a pretty good spot, if it makes sense for your business.

Take Target, as one brand voice for example. If you’ve ever seen one of their commercials, you probably already know what I’m talking about. There’s an energy to them—a bounce, a pep that gets you excited. It’s like you’re getting ready for a party, only it’s at a mid-level retail chain. It sets them apart from the competition—mostly chains that may offer lower prices than Target, but sacrifice a quality experience in the process. If you’re looking for a couple of towels, a gallon of milk, and a toy for your kid, but you want to have a good time shopping for them, the poppy verve of Target’s brand might just pull you in.

Obviously this kind of brand voice would also work for candy, and Skittles pulls it off well. They sometimes tend to drift into slightly weirder territory—like some other brand we’ll discuss in a bit—but it’s always a playful weird. One thing that definitely comes through everywhere in the Skittles brand is their rainbow motif.

Their visuals are bold, bright, and colorful, and the fun and energetic tone of their copy reflects it as well. Who else could pull off “Contract the rainbow” as the kicker to a commercial and still have you hungry for some fruity candy?

Have you ever read something and thought, “wow, where did that fluffy blanket come from? And who wrapped it around me?” Okay, maybe that’s a bit of an exaggeration, but for some of these brand voice examples, it’s not much of one. They’re like putting on some sweats that just came out of the dryer.

It probably won’t shock you to learn that Bath & Body Works fits this category—after all, “bath” is in the name. But through their visuals and their copy, they do everything they can to bring the experience of being in one of their stores to life. Everything is pleasant and comfortably crisp, emphasizing bright colors and whites visually and short but sweet copy. It’s descriptive without being overly flowery.

Sometimes your brand voice is best-served being pleasant and cheerful or playful and fun. And sometimes you want your brand to run full-speed at your customer, spear-tackle them, and shout in their face as they lie in the dust. That might not sound fun for the guy who’s getting tackled, but if you’re buying in certain industries, it’s what you want your product to represent.

Harley-Davidson is one of those aggressive or even rough brands. They’re rugged, they’re out on the road clad in leather, and everything on their website and every one of their ads speaks to that. Their tone is boastful, their headlines challenge the reader to show they are worthy of handling a Harley—rather than begging you to buy one. Frankly, they’re badass enough that it works. 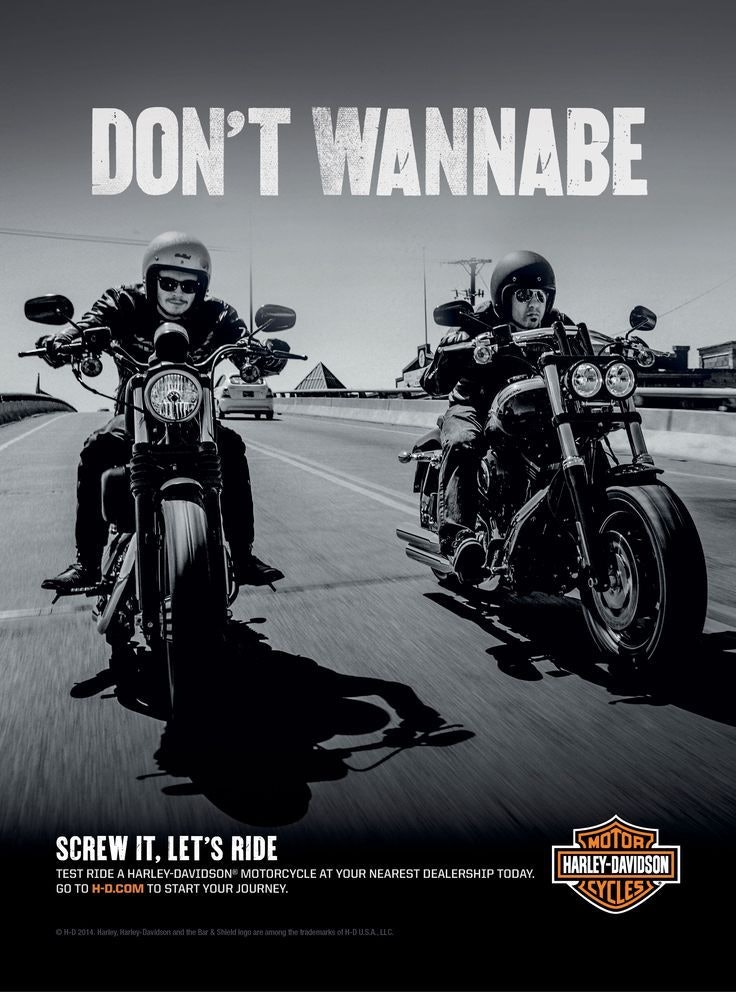 Ford isn’t quite as well-known for this, but over the past few years they’ve really leaned into the tough truck stereotype. They got Denis Leary, who you may remember as Francis the ill-tempered ladybug in Pixar’s greatest film, A Bug’s Life (or from his firefighter drama Rescue Me), to take over as the voice of Ford trucks, and it’s working. If you don’t mind a little salty language you can check out The Ringer’s ten-year retrospective on Leary’s contribution to the brand voice of Ford; otherwise, here’s a taste. It’s in-your-face, it’s confrontational, and it makes you think these trucks will be tough enough to get through anything.

Absurdity is not for everyone, but it is a great way to stand out. And for the people who like it, it’ll really click.

Take Adult Swim, Cartoon Network’s late-night block of programming that’s geared for teenagers and young adults. The name itself implies a more exclusive experience, so you’d assume they can get away with a brand that isn’t for everyone, and you’d be right. Their shows (like Aqua Teen Hunger Force; Tim and Eric Awesome Show; Great Job!; and Check It Out! with Dr. Steve Brule) are offbeat or even strange, and they really lean into that in their branding.

Sometimes it works really well—their pre- and post-show bumpers are so well-liked that there’s a website dedicated to preserving them. In other cases, like the time guerrilla marketing for the Aqua Teen movie was mistaken by Boston police as a terrorist attack, it’s been, uh, less successful. But you’re going to get what you expect from Adult Swim—something that’s very surreal, usually pretty funny, and definitely not geared towards anyone over the age of 40.

A more mainstream brand voice example is Old Spice. It hits a lot of the same beats—surreal, funny, and aimed at a somewhat younger audience—but it’s cleaned up a bit for a network audience, as compared to Adult Swim. The absurdity of the commercials is a bit more bombastic and really less surreal, built around rapid-fire dialogue and rapidly changing visuals that keep the viewer off-balance but also entertain. But despite the fact that it’s unusual—or perhaps because of it—you immediately know that you’re watching an Old Spice commercial.

Find the right voice for your brand—and use it

None of these examples of brand voice is always going to be better than its alternatives in all cases. I’m definitely not saying that your industrial tool and die business should try to do an Old Spice commercial—you can, but if it doesn’t fit your brand, don’t do it. The smart way to go is to determine what your brand truly is, develop a voice that matches that, and practice consistency in how you represent it.

Find your niche, and speak confidently from there. People will listen.

Thomas fills a few roles at E3—writer, editor, and resident European soccer expert—but his chief responsibility is content creation. When he's not crafting thoughtful content for the Element Three blog, he's captaining our kickball team, watching the Mets, or talking up Indianapolis to anyone who will listen.